I don’t have much to say to God these days. No requests. No praises. No promises that I’ll be a better boy. It’s not that I have anything against talking to God. It’s just that I did so much of that for such a long time. I grew up in the Baptist church where all we did was yammer on about this and that. Then I ended up being a preacher for twenty years. I’ve done my share of talking is what I’m saying. I’m kind of in a season of quiet these days.

I like to say I’m listening to God, but I’ve never heard God say anything. I get messages now and then but they always come through a side channel.

What I do these days when I pray is get very quiet. You have to work hard at real quiet. It takes me about twenty minutes to settle in. The Quakers taught me that. At first I thought the Quaker meetings seemed kind of long. Later I found myself arriving early so I could get calm ahead of time because I was losing a third of the hour to the fidgets.

Anyway, when I’m trying to get quiet I listen to whatever is going on around me. The secret of this is understanding that whatever you are hearing is sacred because it is part of your life.

When you find the place of loving what you are hearing, I think maybe you’ve found one of those side channels through which you might sometimes hear from God. And if you don’t hear from God, well, it’s still a very cool, zen-like place to be.

Here is what communion at Saint Luke’s in San Antonio sounds like to me:

First you’ll hear some people walking down the center aisle. They are important people in robes and choir people and others who are chosen, for reasons that I don’t know, to receive communion first. They rustle their way down to the front. Then you will hear two priests beginning a chanting phrase that will last thoughout communion:

For some reason they seem to hit the words “body” and “bread” hard, so those sounds rise above the rest. The two priests will be speaking at the same time, but at different speeds, like two metronomes clacking away at different settings. About every 5th time they will speak in unison, or close to it. Then their phrases veer away from each other:

The sounds of their voices weaving in and out of unison is hypnotizing to me. I feel as if they are weaving a basket to sail me through the bulrushes to safety.

You know it’s time for the congregation to begin moving to the front when you hear the popping of the kneelers falling back into place. They have a lovely solid and wooden sound. Some people seem to kick them forward without a care in the world, making loud noises. Others kind of slip them forward and you hear a quieter “chock” when they fall. The pews groan as they are released from the weight of the people.

After some time you’ll hear a new sound. A rushing, rustling, people moving around sound. It is the sound of those who have received the body and blood of Christ and are walking down the side aisles back to their seats. It is a different sound from the more quiet, gentle sound they made moving down the center aisle toward the altar. You will hear many kinds of shoes now clacking on the floors, and then the groans of the pews as the people sit down again.

Somewhere along the way you will be pulled into the aisle and become a part of the human noise of communion. Your kneeler popping, your pew creaking, your steps down the aisle, the priest saying your own personal “Body of Christ bread of heaven” as he presses the wafer into your palm. And when it is over you will have been part of a great drama that is re-enacted across the whole world in countless churches, every Sunday for the last 2000 years.

And if the mystery of communion is beyond your understanding – as it is certainly beyond mine – you may feel – as I feel – that it is good to be part of a communal impulse toward sacrifice and thanksgiving. These are the gifts of God for the people of God, and now you have fed on them in your heart.

You have kept the feast. 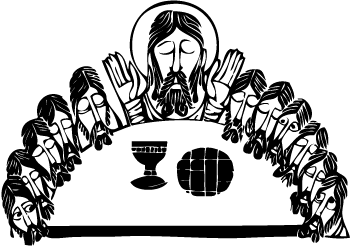