I knew this. I didn’t understand it, but I knew to expect it. And when you start becoming part of a new spiritual tradition, it’s generally a good idea to embrace all the new stuff with innocence and curiosity.

I did notice that the first guy down the aisle had a rod or a stick with a golden orb on the end. And there was a feather tied to the orb. Saw that right off. Turned to Jeanene that first Sunday and said, “What’s up with the feather?”

A couple of week’s later, we got to know James, who is the man with this mysterious, feathery staff. I asked him about the feather, and his answer was completely surprising and delightful.

James is our “Verger.” This is not an office that all Episcopal churches have. It’s an old fashioned position, and I suspect that you can judge the level of how “high” your church’s worship is by the presence of a Verger. Early in Anglican history, and perhaps even predating it, the procession into church would go through the village. Sometimes in those ancient churches, there were people – perhaps homeless or hungry or poor – who were sleeping in the church. They may have even spent the night there. Remember that many of these early churches did not have pews, so the Verger was needed to clear a path.

The staff – called a Virge – was meant to nudge or even poke a sleeping person awake to let them know that worship was about to begin.

But what about that feather?

Well, if a man was asleep, he would get a poke with the Virge. I suppose if the Verger was a gruff sort, maybe even a small bop on the head. But if the sleeping parishioner was a woman, the feather was used to tickle her nose and awake her more gently.

I think you either love this stuff or you don’t get it at all. I don’t know why, but I do love it. And I’m happy that Saint Luke’s has a Verger. And a feather. 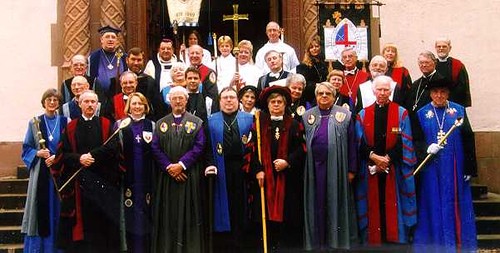