There is a somewhat controversial program that many ambitious ministers try to implement in churches, mostly without success. I’m talking about the infamous “nametag” member identification strategy. The idea is that the members of the church wear nametags so that visitors and infrequent attenders can remember their names. Visitors are sometimes offered temporary nametags – the stick-on kind – if they wish to wear them. Most congregations hate the idea and respond with resistance. Many pastors have tried the nametag thing, only to be shot down by the will of the congregation.

The pros of the nametag concept are fairly obvious:

The nametag thing makes good sense. And ministers or church leaders who suggest it almost always have the best of intentions. But more often than not, people are resistant to it or even hate it and say so publicly at every opportunity.

The cons of the nametag concept are:

I was always kind of an anti-nametag guy myself when I was a pastor. I understood the good parts of it but I felt the tradeoffs were too much.

So Saint Luke’s, the Episcopal church we’ve been attending, is a nametag congregation. The rector – somewhat new – is quite adamant about it. And the congregation seems to love him, so they have gotten behind him, which I certainly appreciate. They don’t push hard, but the word is out that they are hoping for 100% participation from the members. And it does seem to me that about 90% of all members I see have on a nametag.

I have to admit, as a visitor, it’s kind of nice. I like being able to greet people that I’ve met without worrying about remember all their names. And as a newcomer, there are a lot of names to learn. And things like this are small potatoes to me. Nothing worth fighting over. If I was a member of a church and we tasked a pastor with helping our church grow and be more friendly, I think we’d be obliged to give his or her ideas a chance. 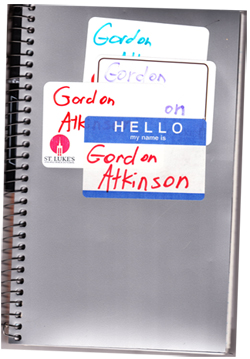 So in solidarity with the good nature in which I’ve seen the congregation accept the nametag challenge, I’ve tried to be good about wearing a stick-on nametag when I am there. I wear mine every Sunday and then stick it on the front of my writing notebook after church if I have it with me.

There is an absolutely charming woman named Gillian (goes by Jill) that we have met at Saint Luke’s. She is from England originally and is very active in the church, quite knowledgeable about church history and theology, AND seems to like Jeanene and me. She really does. She noticed us the first Sunday we were there and always stops to chat.

Last Sunday Jill invited us to fill out a small form and get the real, permanent type of nametags worn by members. Jeanene and I were both taken aback a bit. We’ve been enjoying the church but we’re rather frightened of joining. Jill knows this and assured us that the official nametags don’t mean you are a member. It was her way of saying, “You’re beginning to feel like one of us and we’d like to include you.”

I get it and was touched by her hospitality.

But yikes. The idea of getting a real nametag is frightening to me. I’m only dating and not ready to go to first base or whatever. And I’m aware of something else, something surprising in me. You see, if I join the Episcopal Church, it has a rather final feel for me, as far as being a minister goes. My seminary degree is not accepted by the Episcopal Church. Oh, I’ve heard that there is a kind of short education program for people with Master of Divinity degrees and ministry experience from other denominations who want to become Episcopalians. So I wouldn’t have to start over. But I don’t think I have the energy to even do that. I mean, I really don’t see myself going back to the life of a minister. But if I become an Episcopalian, well, it’s kind of a serious move for me, you know?

So as much as I appreciated her gesture, I think I’m going to stay with the stick-on nametags for awhile. At least until I fill up the front and back covers of my notebook.