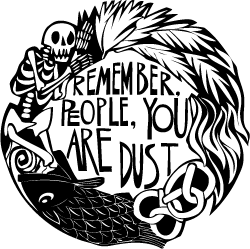 Tonight Jeanene and I went to Saint Luke’s Episcopal Church, where we have been attending for about 8 weeks. We’ve been drawn, almost against our will, to this community of faith in San Antonio. Drawn by the undeniable beauty of their worship, which is put together which such care and love that our hearts are broken most Sunday mornings. Every Sunday I have been moved to tears, this last Sunday by the final alleluia before Lent.

At the beginning of the service, the rector said:

“In the season of Lent, the Church asks its members to scrutinize their lives, to look deeply into their hearts and seek to find an honesty with God and with themselves.”

I instantly knew that the Lenten discipline I’ve been considering for this year is the right one for me. Nothing has scoured my heart and brought me to a searching and fearless honestly like the discipline of writing. For years I had a self-imposed writing discipline that came from my almost compulsive commitment to my first blog. For eight years I labored to write there every week, often twice a week.

That blog died in 2010. It died because I could no longer write in that way. My writing has dwindled a bit since then because the last two years have been exceedingly difficult for my family. We faced what I can only describe as a wracking financial trauma combined with a teen-age daughter who became pregnant. Our health insurance did not cover the pregnancy. Many of you know about the pregnancy because I wrote about it. But I could not bring myself to write about how we were struggling financially. I was ashamed. And I was afraid that if I wrote about it, someone might offer to give me some money as an act of charity. I feared that my writing would have been further spoiled because, in my desperation, I might have been secretly hoping for that charity. Instead of telling people how we were struggling, Jeanene and I disappeared into a shell of anxiety and fear. We did not speak to many people in 2010 or 2011. Our entire existence was trying to get Shelby through the pregnancy and adoption while trying to figure out how to make our house payment each month.

There was nothing in me that could write, unless by writing I could be paid. And so most of my writing was for others and for money, as it had to be.

The writing I will do here in the season of Lent is for me. I don’t mind if you read it, but my goal is simply to look honesly into my heart and spill what I find into my writing. Like all spiritual disciplines, writing from the unconscious in this way both expresses and reveals the content of your heart, which is often hidden even to you until you follow the words that come out of you to their surprising conclusion at the end of a sentence.

I do not know what I will say. I may be profound, profane, or mundane. But I intend to be honest.

For those who might worry about me, we’re doing fine now. I have created a nice business for myself and have a robust group of clients.