I stole a pen

I stole a pen recently without realizing it, so delighted was I by the way it felt in my hand, that it seemed as if it ought to be mine. It felt like my pen. If I had stopped to think about it, I would have realized I was stealing it. But I wasn’t thinking like that. I was just using the pen and it sort of became my pen. As if there are deeper laws of ownership in the universe that scoff at little things like who paid for something.

I wrote with this pen for several days, jotting things down in one of my notebooks. I liked the smooth way it laid its ink down on the paper. I was happy with the pen.

It was my pen.

Then one day I came back into a more rational state of thinking and realized, to my surprise, that I was in possession of a pen and had no idea where it came from. I realized that, in fact, I must have stolen it from someone.

It’s not a very expensive pen. It’s a Pilot Precise V5. About a buck and a half each. But the price of it doesn’t really matter. It seems like the sort of pen that someone else liked. It’s not the kind of pen you pick up at the grocery store. It’s more like one someone got from an office supply store. And probably bought it because he or she also likes the way these pens write.

I tried to remember where I got it so that I could give it back.

But some deeper part of my mind kept drawing my attention away. I would start to think about whose pen it could be, and then I would have an urge to watch television or get a snack. A thought would come into my mind. “Don’t worry about the pen. It’s just a cheap pen. No one cares.”

You see what was happening, don’t you? Some part of me really likes this pen and was trying to keep me from remembering where it came from. And this part of me also seems to agree with those other ownership laws in the universe that have more to do with how we feel about things than who paid for them.

I mean, what is paying for something compared to appreciating it? 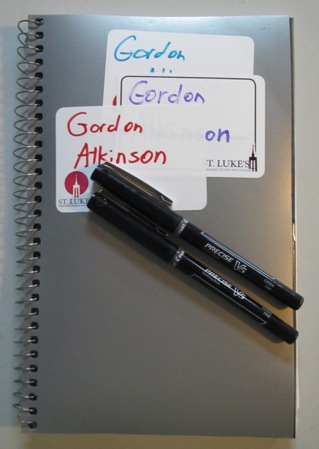 Then a couple of days ago it came to me. It’s my dad’s pen. I must have picked it up the last time I was at his house. I’m fifty-years-old now and long past that kind of adolescent thinking where in your mind your parents stuff is also kind of your stuff, so you might just walk off with things. But still, I didn’t worry as much. Somehow because it was my dad, I felt a little closer to owning it than if I had taken it from a complete stranger.

I didn’t call him, by the way. He has a couple of boxes of these pens. Did I mention that I really like the way it writes?

That was several weeks ago. Today I found another Pilot Precise V5 sitting by one of my other notebooks.

Where the hell did this one come from?