The man in red

This time he was under the freeway at I-10 and Wurzbach next to the guy with the walrus mustache who sells newspapers. Hitchhiking as usual. I couldn’t believe he was wearing my red Monty Python Spanish Inquisition t-shirt that my daughters gave me. It was hard as hell to pick him up too. There’s no shoulder on the road so I had to let the cars pile up behind me while he took his precious time getting in. A couple of people honked.

I didn’t look at him or say anything. He sat patiently in the passenger seat. I turned at the Pizza Hut and pulled into the Saint Francis parking lot. I shut off the car and took a deep breath. I hate looking at him, but it’s impossible not to. I turned my head and there he was looking back at me with one eyebrow raised, amused.

My eyes went to the top of his head to look at his hair. Of course. Then his glasses. The short beard. Slightly chubby midsection. Legs were muscular. Shoulders. Then his blue eyes. He looks just like me. That’s always hard to get used to.

He started the conversation.

“What do you think, buddy?”

“I don’t like our hair, but what are we gonna do?”

“Exactly. What do I think? We don’t look as fat as I thought. That’s nice. Shoulders still look kind of strong. Would look better without the gut. The legs are amazing though. Very muscular. That’s something to be proud of I guess.”

“Absolutely. Our legs are amazing. By the way, the whole crew down below wanted me to thank you for the cycling and exercise over the last few years. That’s been a game changer. Everyone is doing better. Across the board. The twins have had a creative explosion. They’ve produced some incredible night movies for you. I hope you’ve been able to remember some of them.

“Yeah, there was a nice one recently with a winged lion, and…”

“YES. Everyone loved that one. Academy award winner. I saw you wrote that one down and posted it on your little blog or whatever. The twins were flattered and wanted me to thank you for that. Also Aletheia sends her love. She wasn’t in the Winged Lion production, but I hear the twins are writing her into some upcoming features. I think you’re gonna like them.”

I inhaled and then exhaled slowly. I put my forehead into my palm, closed my eyes, and leaned forward. We didn’t speak for a couple of minutes. I could feel his eyes on me though.

“I know you’ve had a rough time with Aletheia over the years. It’s not her fault. She only tells the truth. That’s her nature. That comes from on high. Orders from the top. So, you know, it’s not fair to hold it against her. The truth is sometimes wonderful and sometimes awful and…”

“Okay, is that why you’re here? To warn me that Aletheia might be in some upcoming dreams?”

He rolled down the window, shook a cigarette out of a pack and lit it.

“Naw, I’m not her messenger boy. I got my own agenda. I’ve got a message for you. Somethin you need to pay attention to.”

I turned the key and started up the car again.

“Well, this is not a good time. I’ve got somewhere to be. So I’ll let you off anywhere you like, but I don’t feel like this shit right now.”

He coughed out a lung full of smoke.

“The fuck? I come up here. Give you a personal visit. This is primo unconscious interaction, man. It’s the best shit there is.”

He took a drag, turned his face away, and blew the smoke out the window.

“And where’s the gratitude? The guys from Lucid Dreaming show up what, once or twice in your life? Pretentious bastards say my logos isn’t pure? I’ve got the straightest truth you’re gonna get in this life. If you don’t want to hear it, just drop me off back under the freeway. I’ll turn this message over to the twins and you can try to find your truth in one of their Fellini films. Good luck with that. Aletheia will probably lean in to kiss you and bite your goddam ear off. Figure that shit out.”

I shut off the car and turned to face him. He was looking out the window, blowing smoke out of his nose. I put my hand on his shoulder.

“I’m sorry. Okay? You’re right. Every time you show up it hurts but it’s always good for me. Look at it from my point of view. I’m trying to run the show up here and I don’t even know if I’m really in control. Got the twins’ movies playin in my head every damn night, but I can’t remember most of them. Aletheia dropping in and out with her mind games. That scary bastard from that one dream? The dancing Frankenstein guy who beat the shit out of that kid with a board? What was that about? The anxiety wraiths and the whisperers are on my ass 24/7. Did you know that? I’m just trying to steer the ship up here. Be a good husband and father. Make a little money. Maybe find a little happiness here or there. Do something nice for someone else maybe. For Jesus’ sake. I have very simple needs. But you’re right. I’m sorry. I’m lucky you came to see me. So pretty please, with sugar on top. Tell me your damn message.”

He laughed. Wisps of smoke shot out of his mouth and floated upward.

“Nice touch. Diffuse the anger with some humility. Drop a little sarcastic anger at the end to preserve your honor, but do that with a funny movie reference. I caught that, by the way. Slick move. I deeply appreciate the technique. I bet you were a helluva preacher.”

Then he got manic. Started talking fast and gesturing with his hands. He took a quick drag and flicked his butt out the window.

“Okay look. What I got for you is the raw material, okay? I got in good with the twins. You probably haven’t noticed, but I’ve had some bit parts in some of the night movies. Mostly they got me working as a key grip. But check it out; I got into their office and got a file right out of the inbox. You gettin this? I got the material straight from the depths. From down the deep hole where the messages come from. I got it before they could tear it up and turn it into that artsy-fartsy symbolic shit they do.”

“What do you mean ‘from the deep hole?’ I thought the messages came from God.”

“It’s the same thing, man. On high. Deep hole. There’s no up or down where I come from. Forget it. Point is, I got a plain text message for you. Straight from the Man. Uncoded and in English.”

He took out another cigarette. Tapped it on the back of his hand a couple of times then put it in his mouth. Flipped open a lighter, held it to the tip, took a pull, then snapped the lighter shut.

“Jesus, with the drama this guy. YES.”

“All right. Here it is. Direct quote from the file. Word for word.”

He took a drag and exhaled.

“Mind you, it’s in your dialect. I mean the man does want to be understood. But you shouldn’t think this is the way he talks.”

I banged my forehead onto the steering wheel slowly, three times, then turned to look at him.

He cleared his throat.

“The Church has been fucking with you your whole life.”

I stared at him. My eyes kind of bounced around his face. Top of his head, eyes, cigarette. He looked back. Blew some smoke out.

“I don’t understand exactly. What that means.”

“There was some explanatory material included for the crew. The main message though – what I told you – was in English. That’s the way the man does it when it’s big news. It gets delivered in the subject’s heart language. The twins are supposed to hammer that one home over the next few months. Hard. And Aletheia isn’t supposed to interfere with this one either. No comforting you. No distractions. The rest contains details and whatnot to help with the film production. That part’s in our language, which of course you can’t understand. I can paraphrase it though.”

“Okay. What did the rest say?”

“Basically, the Church is full of liars. Really nice and polite and sweet little liars. Little lying lie-babies. As individuals, Church people – the real ones anyway – are wonderful. Saints. As a whole, they’ve been lying to you. You were brainwashed as a baby. As a small boy. They’ve taken 53 years of your life and you need to get out now, while you still can. While you still have a few years left. Because giving your life to God is honorable. But giving your life to the Church does not mean you’re giving it to God.”

I stared out the windshield. In the distance, on the top of a little hill, I could see the red front door of Saint Francis. The ancient mark of sanctuary. “Enter these doors, all you who are weary and heavy laden, and you shall find rest.” I kept waiting for my mind to wrap itself around what he had said. I was waiting for some kind of emotional or mental reaction. Waiting for my intuitive sense of right or wrong to kick in. But I was getting nothing.

“I have no response to that. I don’t know how to process it.”

“Yeah, it’s a lot for a brainwashed church boy to take in. You’ll be fine though. Give it some time. Message like this has to sink in.”

He rolled up his window, pointed to the car keys, and turned his wrist like he was starting a car.

“Hey, go back through that intersection and just drop me off at that HEB, okay? I want to get some Mexican Coke with the real sugar. We don’t have shit to drink down there.”

We drove to the HEB in silence. He put his feet up on the dash and closed his eyes.

When I stopped the car he started to get out but I stopped him.

“Before you go, I’ve got a question. Aletheia, the twins, all the crew down there, the folks from central casting and all that. They all tell the truth, right? None of them can lie. It’s not in their nature.”

“That’s right. They get the messages from the hole and they pass them on. But it’s so slow their way. You gotta work through the symbolism. It’s so old-fashioned. That’s why I thought I’d help you out. Give you a little shortcut.”

“But the point is, they tell the truth, right?”

“Do you only tell the truth?”

He didn’t say anything.

“Because I don’t really know who you are. We’ve only met a couple of times when I picked you up on the road hitchhiking. How do I know you’re telling the truth about what was in that folder? Or that there even was a folder.”

He looked at me and then gave me a frowny smile. The kind of smile that appears on people’s faces when they see a cute puppy. He got out of the car and bent over to talk to me through the open window.

“You’ll figure out who I am at some point.”

He started backing away from the car toward the store. He shrugged and held both palms up.

“But c’mon. How are you not gonna trust a face like this?”

This is the second appearance of this mysterious man in my fiction. The first was in a story I wrote in 2007 called “The Man in Black.“ 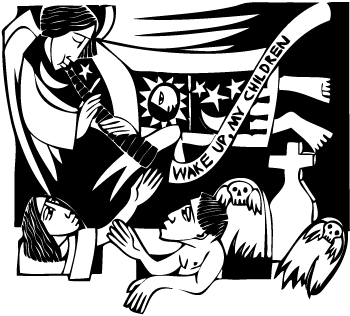