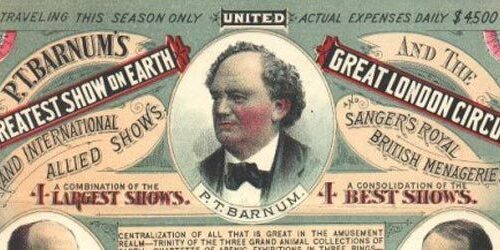 It’s as if P.T. Barnum had run for president years ago. Everyone knew P.T. Barnum and knew what kind of a man he was and knew how he operated, but a segment of society became convinced that P.T. Barnum was no longer P.T. Barnum but had changed into a trustworthy politician with an astonishing vision for America that would return her to an imagined former state of glory, a state that always exists, Xanadu-like, a few decades into the past of every generation.

Others could never understand why anyone would think that P.T. Barnum would be anything other than P.T. Barnum, since he had never demonstrated any inclination to be something other than himself and was convinced that he, P.T. Barnum, was a genius with all the answers, hubris being the snake oil the con artist uses to draw himself fully into his own schemes.

Ah, but that beloved vision of a lost, great America was so compelling and lined up so perfectly with a mournful shift in the Zeitgeist that great numbers of people set aside what they undoubtedly suspected was true in favor of what they hoped might be true. That desperate hope is something we all have and indulge in from time to time. Men like P.T. Barnum know this and use it to cast imaginary shadows on the wall behind the gaslight. This is their dark art.

But of course all lies and schemes, pyramid or ponzi, collapse at some point, and when the curtain is finally pulled back we discover that P.T. Barnum is simply P.T. Barnum and has never been anything but P.T. Barnum.

Now a question remains for those who have been true believers in this man, and I ask it with great sympathy as one who has himself been a follower of more than one P.T. Barnum over the years.

How much longer will you throw good money after bad?