I am drawn to the mystery of our ancient ancestors and obsessed with their god-like silence. Having no written language they left us nothing ephemeral but instead laid a foundation of guttural sounds and gestures from which we formed our modern tongues. What they did pass on were things older and deeper than writing. Archetypal stories and myths that are long gone but gave birth to other stories that in turn gave birth to ours. What fills our stories filled theirs. Love and loss and fear and gods and darkness. Heroes and villains and fire. Devils and sacrifice and salvation. I long to know more of our ancient mothers and fathers, but they marched mutely to their stone age graves and left us only what our experts can surmise from sifting through their middens and studying the odd pieces of art that survived.

I am respectfully awed by the stoic privacy of our more recent ancestors and amused by the secrets they kept. We glimpse their faces in sketches, death masks, and daguerreotypes. The last of their generations saw the invention of photography. The colors of their world, along with their smiles and giggles, were exorcised from their photographs, leaving them to stare solemnly at the future with grey and expressionless faces. But oh, how they wrote. They left us their dreams, their manifestos, their revolutions, their letters, and their literature. Their images seem other-worldly but their words make it clear they were kindred spirits.

And I am charmed by the shy maiden generation that is with us still but only for a few more years. Their Kodachrome stills show us the first photographic record of color as seen in their denim work pants, red lipstick, and sleek rounded cars. They laugh and smile and dance and sing for us in their moving pictures. They gave us their slang and their music and their jokes and their sitcoms. But they were stingy with their hearts and their true selves. Those they kept hidden and instead showed us their duty, their honor, their love, and their rage.

I wonder how our children’s children will see us? We think ourselves to be honest above all else, but I have my doubts about that. Ours is a pornographic generation. Everything that can be seen or imagined has been uncovered, animated, exaggerated, and shown to schoolchildren. Every impulse is now a registered fetish with a community, every frailty has a diagnosis and medication, and there’s not one among us who is not her own christ with a first edition gospel in her pocket. Future generations will not want for information about us. The problem will be sorting through it all. And I can’t imagine they will take the time to do that.

I think those who come many years from now will be amazed at what we tried to pass on to them. They will glance at the volumes of data and video footage, then select a few things they want to keep. And they will be the same things that every new generation retains. Some guttural tones and gestures, from which they can construct their own languages and that same old set of worn archetypes that have been passed on for millennia. All the rest – the dross and chaff – they will shovel right into our graves, imposing on us the same silence our ancestors had the dignity to keep of their own volition. 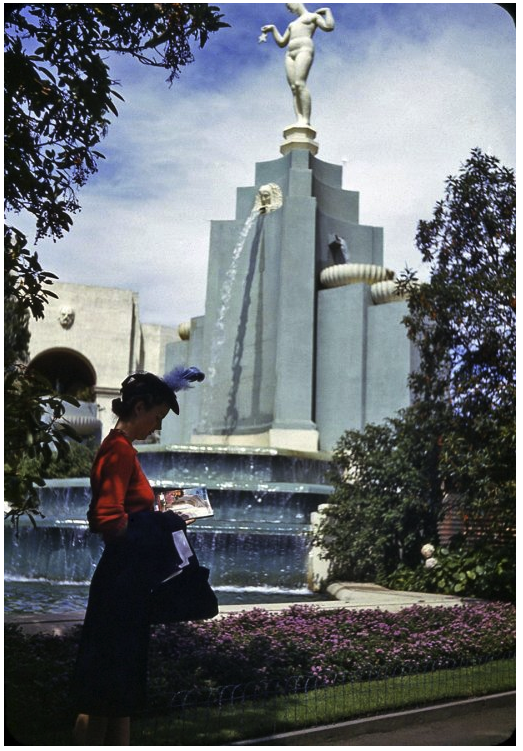 Inspiration for this piece. San Francisco 1940. From a box of Kodachrome slides found at a flea market. The original owners of the slides are unknown, therefore the identity of this woman is unknown. This was her life. These were the colors on that day.