Home Beginner's Guide to Becoming Episcopalian Episcopal Rites of Passage: Accidentally Setting Your Beard on Fire at Your...

Admittedly, setting your own beard on fire at the Easter Vigil is a lesser known ritual. Not one that many Episcopalians go through. I might be the only one person you’ve ever heard of who has done this. But given the late hour of the service, the hand-held candles, and the large number of scripture readings involved, I can’t be the only one.

You want details, right? Of course you do. And I’ll get to them in a moment. But first a word about tricksters.

The archetypical trickster is as common in human stories as the hero. Some religions even incorporate tricksters into their various faith traditions. The Caganer of medieval Spain comes to mind. The Lakota people recognize a backward spirit called Heyoka. This spirit does the opposite of what you might imagine. When everyone else is crying, it is laughing. When they laugh, it might cry. Certain people in communities are said to have the Heyoka spirit. Their calling is to be delightfully inappropriate. They shake things up, bringing insights and truths to light that might remain hidden if if things unfolded comfortably and according to plan.

We don’t have official trickster roles in American Christian traditions – televangelists notwithstanding – but the Heyoka appears now and then unofficially. Like it did with me Saturday night before Easter.

I was eagerly looking forward to my first Easter Vigil experience with my friends at Saint Francis. We met outside the sanctuary as the sun was going down. Our Paschal Candle was lit from a brazier and we solemnly filed into our darkened sanctuary, led by its dim light. We used small candles lit from Paschal Candle to read the scripture portions chosen for the service.

There were a lot of passages to read. So many that our candles burned down to stubs. People moved back and forth in the community, providing fresh candles as needed. In my weakness, my attention began to wander a bit. At that moment, some sort of Episcopal Heyoka decided to have a little fun with me. It had to be Heyoka, because the irony is too rich. For you see, I started looking around and wondering if anyone ever accidentally lit their hair on fire at the Easter Vigil.

Hey, it could happen. Someone gets a little sleepy and starts nodding, some hair dips into the flame, and there you go. I got a little concerned and checked the people around me to make sure everyone was okay. Walter and Joyce Baker were sitting in front of me. I decided if Joyce’s hair caught on fire I was going over the pew to help put it out. I totally would would do that too. I would. I looked at my hands and wondered how badly they would get burned if I had to help put out a fire on someone’s head.

Okay, here’s the second-most embarrassing thing about the evening. The “penultimate embarrassment” as scholars call it. I started feeling a little proud about the hypothetical scenario I had created in my head, wherein I would dive over the pew and save Joyce or Walter from serious injury. Because, you know, that’s just the kind of guy I am. If I imagine your head catching fire, I will also imagine myself saving you.

And that’s when the ultimate embarrassing thing happened. I was so busy looking around at people’s candles that I forgot about my own. I leaned forward to look down the row and make sure everyone was safe. There was a sharp hiss and a little puff of smoke, followed by the unpleasant smell of burned hair. Also a little spot on my chin suddenly felt kind of warm.

Yeah. I set my own beard on fire at the Easter Vigil service. I did that. That would be me.

I brushed the ashy bits of hair off my chin and looked around. No one else noticed. Probably because they were paying attention to the worship service. And I can promise you that I paid close attention from that point forward as well.

I did laugh a bit later when I realized how ridiculous I had been and what it took to pull my mind back to our worship. I think I zoned out during the Ezekiel reading, set my beard on fire, and was completely back in the swing of the service well before the triumphant first allelujah of Easter.

Unexpected things happen in worship services all the time. Babies cry, people pick their noses during prayers, mobile phones go off at the worst moments, preachers say things that could be and are interpreted sexually – leading to snickers from the teenagers and naughty glances between husbands and wives, and occasionally someone sets his own beard on fire, pats it out, looks around to see if anyone noticed, and then goes right on worshipping as if nothing happened.

We church people try to put together rituals and practices that are high and mighty and point to cosmic truths that exist on exalted planes, far above us. We are also silly creatures prone falling into the exact opposite of what we intended.

The Heyoka has a strong, if unofficial presence in Christianity, is what I’m saying. And I suspect its presence may be particularly strong in me. So I smiled as I trimmed my beard on Easter Sunday morning. And I’m counting the Easter Vigil service as my richest spiritual experience of 2013. 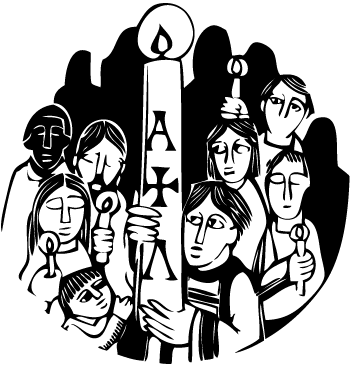