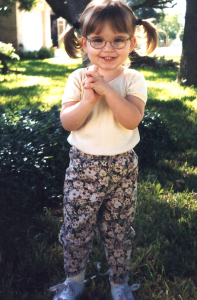 I’m in my office reading “Billions and Billions” by Carl Sagan and glancing occasionally at the picture of my youngest daughter that is on the screen of my computer.

In this very moment, right now, I am being pulled in opposite directions by two distinct and powerful forces in my life. The one is my desire for truth and my commitment to be fearless and unashamed in my search for it. The other is my joyful adoration of the smallest and most precious things in the world.

I delight in a chipped marble I once found on a remote part of our church property, a marble that must have lain there for half a century or more. Once I nearly swooned at the sight of a little girl wobbling on her first bicycle with a soiled Band-Aid attached only at one end and flying like a flag from her skinned knee. This is one way that I look at the world.

I also look at the world with a stubborn determination to keep my eyes open and to trust the evidence before me. Mindless forces tear at our planet with apparently no regard for life, liberty, or the pursuit of anything. Nature cares not for suffering. Lions sometimes kill baby elephants over agonizing hours by eating them from their hindquarters up. Their cold, emotionless eyes reveal a consciousness incapable of concern for the screaming agony of their prey. The night sky is more than the simple dome that Genesis describes. It is, in fact, the glass through which we gaze with infant eyes at a universe which is beautiful, but completely beyond us. The unknown forces that create the stars seem random and are violent beyond anything we can imagine.

So you see, this moment I am sharing with Sagan and Lillian is not the first time my life has been pulled in different directions by adoration and reality.

Carl Sagan is the one who got us thinking about billions back in a day when millions meant something to most people. Sagan touched our provincial eyes and bade us see. And see we did. He provided the first glimpse of the universe to a generation who watched Cosmos on TV. For many of us, that was the first time we realized how small we really are. We are so small as to be unable to imagine the size of our own tiny planet. The size of our solar system is utterly beyond all comprehension. Voyager 1, the fastest space vehicle ever created, has only just left our solar system after thirty years of travel. At its present speed, it would take about 80,000 years to reach the Alpha Centauri system, our closest star neighbor in this spiral arm of the Milky Way Galaxy.

Really, why even talk about the size of the universe? That conversation involves numbers that only make sense to mathematicians and astronomers who are fluent in the language of exponentials. With our measly millions and billions, what business do you and I have in speaking about the universe?

So here I am, reading Sagan and looking at Lillian, and I am now remembering Annie Dillard’s book, “For the Time Being.” Dillard rightly notices that much of what we see and experience in the world leads us to think that the individual does not matter. The horrific brutality and utility of natural selection scoffs at our sentimental love of individuals. Even individual species mean nothing to the blind forces of evolution.

And looking to the heavens does not give us comfort if we are searching for our worthiness there. Even now galaxies are colliding, obliterating solar systems as they slowly grind through each other. What would you say if I told you that an entire planet was destroyed on the other side of the universe, wiping out an entire race of intelligent beings? They are gone, along with their history, their art, their philosophy, and their desperate spiritual longing for God.

What would they say if they heard the same about us?

A tsunami rocks the ocean bottom sending a locomotive wave to slap at our matchstick villages. Sophisticated theologians say there was no Godly anger or vengeance behind those waves. Does it make them feel better to think that the waves were random furies of nature? Is it a comfort to think of our world as a cold and mindless orb where tectonic plates grind together, greased with the bodies of those unfortunate enough to live above their tortured seams?

And in the middle of these thoughts, I cast my eyes upon the picture of my youngest daughter, hands clasped together, her eyes gleaming and intelligent behind the smallest glasses you have ever seen. This is Lillian Hope Atkinson, named in honor of Jesus who once said, “Consider the Lilies of the field.”

This is Lillian, whose precious eyes twice moved me to write about her bifocals. This is Lillian. She is just one of billions and billions of children born on this planet in the years since Homo Sapiens first walked its surface. There is no rational argument that can be made to support the idea that she is in any way special or of any importance in the Cosmos. Neither her life or her death, her suffering or her joy will move the planets or influence the stars.

And yet she lives at the center of the universe of my mind and heart. Were she to die tonight her death would be but a tiny ripple on the surface of the vast ocean of reality, but I would be wounded unto death. I say unto death because you never recover from the death of your child. My wife once met an elderly woman in the hospital. In the middle of their conversation, the woman was overcome by racking sobs. She was crying for a baby who died as an infant, some sixty years before. Her grief was still that raw.

And so I look at Sagan’s book and Lillian’s picture. Suddenly I want to bow my head and curve my shoulders, putting my arms around her and drawing her into the tabernacle of safety under my chin. I would turn my back on the Cosmos and whisper into her ear, “Don’t listen to it. You are special. You are unique. You are Lillian.”

Somehow the same mind that shows me the bleak realities of the universe also tells me that there has been no child born of man who is like unto Lillian. She is unique in all of history and in all the universe. And this too is a truth that must be reckoned with.

Our common humanity cannot, will not abide the thought that a child does not matter. With one eye on the sky and the other suspiciously watching the movement of the earth, nonetheless we stake our claim.

We are unique. We are important. We matter. And our best impulses lead us to cherish and celebrate these truths. Some of us cradle what is beautiful and good, pushing it through the filters of our creativity. They are artists. Some of us rush across the face of creation to rescue people in pain or in need. They are saints. Some of us work for goodness in quiet ways and in little towns. They are heroes.

On Sunday mornings, when I arrive at the church before the breaking of dawn, I am mindful that I join myself with the communion of saints across the years in singing ritual songs of human worth and of God’s interest and care. I like to think of Christianity, with its stunning and impossible story of the ultimate worth of humanity, as an offering to what we feel in our bones must be true.

If our ultimate worth cannot be seen or divined from the rocks and the stars, we will hold hands across the face of the earth and sing it into existence. If it seems at times that God cannot be found, there are millions of people across the face of the earth demanding God’s existence. This means something. We demand value for ourselves and for each other. God language – theology – speaks of that value in ways that are inclusive of everyone. God words are archetypal. People can hear God words.

There is something deep and uncompromising within us that cannot look upon the face of a child and consider her to be merely fodder for evolution’s hard turning. And even though we often sin by not living in ways that reflect the values we feel, we are ashamed and dehumanized and repentant. We wish we were better people.

This is another major theme of the Christian spiritual path. We aren’t the people we want to be. We admit this, like alcoholics, and gather together to walk with the Spirit of God, one day at a time. After many years, we find that our souls have been changed for good. We hope and pray that we live in ways that reflect what we dream and hope for humanity.

I stand behind Lillian with my hands on her shoulders. We look into the night sky, and I show her once again the belt of Orion, hanging there near the band of stars that is our only view of the Milky Way. I stand with Lillian, and BY GOD I will see goodness and mercy in the stars and in ourselves.

And I will stand in peace and with love beside all others who see the same.

I live in San Antonio and write stuff because I really like to write stuff. This is the place where you can find the stuff I've written, if you want to.